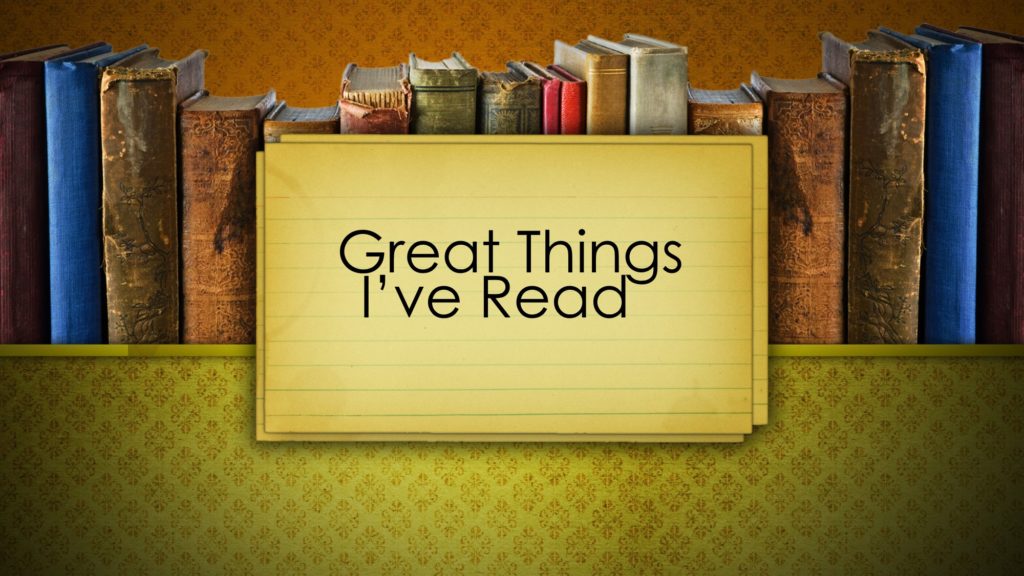 As I’ve always said, “Original just means forgetting who I got it from.” I’ve forgotten who I first heard that from. Actually, no I haven’t. Harold Comer was the first person I ever heard say that. But apparently a lot of my friends forgot they heard that from him, because I hear it repeated frequently. But I digress.

Sometimes, I think it just pays to share the sources. One of these days, the things I put in this post and the ones to come like it will end up in sermons, classes, and posts when I’ve forgotten where they came from. This ongoing weekly series will simply share some great statements I’ve read recently. I hope it gives you some ideas for books you’d like to check out.

Good change scientists don’t just thrash about trying every idea that makes the front cover of a popular magazine. Instead, they use a specialized form of scientific inquiry. Here’s a quick overview of how Changers ensure that they stumble forward rather than downward.

First, examine when and where you currently give in to urges. This was Tim’s mistake. Rather than examining his unique challenges, he selected strategies that sounded new and interesting. Instead, he should have examined what we’ll call his crucial moments–the times or circumstances in which his choices are the most consequential.

Tim was like the fellow who searched for his lost car keys under the streetlight near his car, not because he figured he dropped them there, but because he could see better under the light. Tim had selected convenient and cool-sounding influence methods, not relevant ones.

Once you’ve identified your specific vulnerabilities, create a personal change plan (or hypothesis). This plan consists of what you’ll do to resist, remove, and even  transform your urges during critical times.

Finally, implement the plan, observe the results, make changes in the plan (based on what worked and what didn’t–resulting in a new plan), and repeat as needed until you’ve succeeded.”

Preaching With All You’ve Got

Creating a Culture of Expectation

We could start here. I recall reading an unpublished piece of research which contrasted the motives for attending church services in two different congregations. In one, worshippers commented on their duty to attend or expressed a wish ‘to meet with like-minded people’. In the other, most people interviewed spoke of ‘coming to meet with God’. The difference in motive is enough to create two cultures, on where the sermons is an endurance test, the other where it is an opportunity to hear God speak.”

Preaching: Communicating Faith in an Age of Skepticism

The famous nineteenth-century British preacher Charles Spurgeon was bold in his insistence that every sermon lift up Jesus for all listeners to behold. He complained that he often heard sermons that were ‘very learned…fine and magnificent,’ yet all about moral truth and ethical practice and inspiring concepts and ‘not a word about Christ.’ Here is what he says about such preaching, evoking the words of Mary Magdalene: ‘They have taken away my Lord, and I know not where they have laid him. I heard nothing about Christ!'”

The religion of the ascetic fears that if the joy of physical love is not condemned as an innate evil, the mind will forget spiritual things and instead plunge into ever deeper corruption. In the same way, it rejects the gospel of salvation by grace through faith on the grounds that it inevitably leads to more sinning ‘that grace may abound.’ In its attempt to build a wall around the human soul, legal religion only separates the sinner further from God and gives him or her a false hope of escaping the intermingled yearnings and lusts of the heart.”

The Song [of Solomon] presents sexuality as a good thing protected by marriage and not as an evil thing made permissible by marriage.”

I hope you enjoyed the foray into what I’ve read recently. I’ll share more each week.